When you think about technology you think about Boston corridor you might think about Silicon Valley, even Austin Texas. were here today to talk about southwest Indiana and this amazing company called Ciholas. come on in and we’ll tell you more.

I’m with mike Ciholas with Ciholas, the company the technology company based here in Indiana’s great southwest. so, Mike tell me a little bit about what is Ciholas.

Ciholas is a contract engineering firm, what that means is that we do things for clients, we provide technology to them. Technology is a confusing and complex subject, and people don’t know what technology can and can’t do, and we provide the engineering staff. That allows modern technology to be added to other people’s business. So, our typical client is another business that is involved in some industry, and they need to use technology, and it’s hard for them to use that technology with their own staff. Then they hire us to do contract engineering. so basically, we invent things for people.

Yes, well, even more than that, we have their problems. So, they have some sort of issue that they need to solve, and they think technology will solve it, and they don’t necessarily know how the technology will solve it. So, they can come and describe their problems to us, and then we can invent an idea for them. Sometimes they come with their own ideas, and sometimes those are good, and sometimes they’re not. Then we can invent another idea that might be better for them, and then we can realize that idea, we can make it real, and make it work for them. And very often, the client doesn’t believe they can do something. We can enable them to do something they didn’t think they could do.

So, this started when? when did you start here?

When the company really started was in the mid 90’s when I was a one-man consulting company. I was doing this as my full time advocation. I would come and work for people as a one-man consulting company. Then, starting in about 1999, I hired my first employee, and then I hired my second, and then we moved into a bigger facility, and we hired more employees, and then moved into a bigger facility, and then we run that up to present day and now we’re in a 35,000 square foot facility with 40 engineers.

Which is a pretty amazing, and most of those engineers are a lot of those who came from the University of Evansville, university of southern Indiana or individuals that might have gone off to school but decided to come back.

Yes, most of our staff has some sort of local connection. Either they grew up here, have family here, or they came to school here. And so, we are cultivating the local connections. The university of Evansville is by far our strongest path, so we have about 23 engineers from the University of Evansville, we have a few from USI that’s a growing number now, we have people from Purdue, Rose Holman and so forth.

Well, it’s typically fairly sophisticated electronic devices that involve software, electronics, and usually has some sort of wireless component, because wireless is a big deal in modern times. Radios, sensors, high speed, it’s technology that is usually not very common. We’re inventing something new, and that creates a lot of patents for my clients. We have a whole wall full of patents that go along with this. We will show you some examples of things we have invented that we can discuss. As you said, most of our projects are confidential. Some of our clients consider it secret that we even work for them because they don’t want the fact that we do things for the client to get out because we’re kind of their secret. We have done things that have flown in space, we have done things that have traced coal miners underground, we’ve done things in sports timing, for example, all of Usain Bolts current world records were timed on equipment invented and developed here.

Wow, that’s pretty amazing, and right here in southwest Indiana. One of the other really interesting things that you’re working on is the Museum of the Bible project, and part of that technology, your technology, is used in that facility. How so? Can you tell us about it?

The Museum of the Bible is a 430,000 square foot facility in Washington D.C. It’s 2 blocks South of the Smithsonian Air and Space Museum. It’s a Museum dedicated to the history of the Bible, the Museum has seven floors. Each floor has a different focus. My particular favorite floor is floor 4, which is the actual history of the Bible itself. Floor 2 is the cultural impact of the Bible. In that Museum they decided, very specifically, to use very advanced technology to tell the stories that they wanted to tell. The technology they got from us was something called Ultra-wideband tracking (UWB). UWB tracking in the simplest terms, is an indoor GPS system that is highly accurate, accurate within a few inches. They provide devices to visitors called digital guides. It’s a tablet device that you carry around, and we provided the technology that is inside the tablet that will track where the tablet is, and what way it’s facing inside the entire museum.

Yes, Ciholas is a world leader in developing UWB tracking technology, and we have several patents and several devices related to it. We have found applications throughout the world related to tracking athletes, tracking equipment and supplies in factories, tracking machinery, providing proximity around machinery so it doesn’t run over people, providing safety interlocks on equipment, we’ve tracked horses, we’ve tracked dogs.

You tracked horses? But animals, you can track animals then in a way?

So, you’re looking at the trajectory of let’s say a football as your throwing it, and your analyzing it as maybe as a quarterback or running back or as a receiver, you can be able to tell how that’s actually interacting with the equipment?

As you may know, sports analytics is a very big and growing field, and so collecting the data off of the athletes and off the sports equipment provides additional analysis that you can do, you know, like what is the spin rate of a pass that a quarterback throws, what is his velocity, what is his acceleration, how fast does a running back respond or cut. Those kinds of things can be collected from the information from tracking them using this UWB system.

That’s pretty amazing in itself. Well, you’re doing this amazing stuff around the world, but from a location here in Warrick county, Indiana’s great southwest. What makes this region attractive to you.

Well the first thing is that my wife got a job here, so we moved here.

And as a one-man consulting company, I could do my work anywhere. So, wherever she needed to go for her job was the first reason we’re here. After we got here, we found that the benefits of this region we’re fantastic. It’s very centrally located in the US, which makes travel for me very easy to go to my clients, and we work nationwide and globally. It’s got a very reasonable climate, very reasonable cost of living, has very good people, low crime, access to local resources is very good. We’re kind of the, instead of the Silicon Valley, were kind of the Silicon Prairie of Southwest Indiana. We’re bringing high technology to this area which helps a lot with the brain drain problem that sometimes areas like this have. You have that whatever local talent there is, seeks the coast, and the other areas where they can get higher paying jobs, and here we can keep those people employed in the region that they would like to stay.

You talk about students you have from the university of Evansville, university of southern Indiana, Purdue, rose Holman, I mean great universities, do you find sometimes it’s more of a challenge to attract talent here? Or are you growing your own?

Well, we take students basically with a bachelor’s degree, sort of fresh out of school, so a majority of our staff are relatively young, relatively inexperienced engineers. We invest a certain amount of time to get them up to professional standards and so forth, so were not looking necessarily to hire sort of ready to go experts from the outside. We’re kind of cultivating the local talent that way, and the local universities do a fantastic job. University of Evansville, USI, Purdue, they all do a very good job of turning out really qualified candidates that have a lot of capability. We’re giving an option for those candidates to stay in Southwest Indiana and continue to do high tech things here while living in this area.

Because obviously what you do is incredibly high tech. So, what does the future hold for Ciholas, your company?

The future for Ciholas is very bright. We are working globally and working with companies all over the world to take some of the technology were inventing here and distribute it. Whereas we started as mostly a contract engineering firm working on other people’s devices, we’ve also started inventing things on our own and licensing that to other companies around the world. That part of the business is going to grow and eventually become the dominate part of the business. That will allow us to grow at a faster rate, generate more revenue, and have more impact in the world.

Well, I want to thank Mike Ciholas for being here and stay tuned for the kinds of technologies you’re going to see coming out of Indiana’s great southwest. 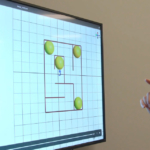 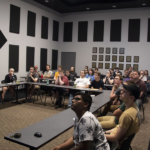